Original French title: "La Marque Jaune".
Although this is the first book in Cinebook's "Blake And Mortimer" series, it is actually the sixth album going by the current Belgian order, after the three volume "The Secret Of The Swordfish" and the two volume "Mystery Of The Great Pyramid".
The first book in the series "The Secret Of The Swordfish (Part 1)" will actually be the 15th book in Cinebook's series.

The Yellow "M" (Table of Contents) 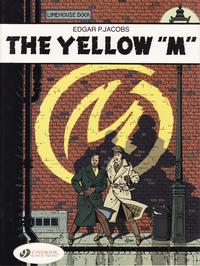 The Yellow M (Table of Contents: 2)

Originally serialized in issues #256-322 of the Belgian 'Tintin' magazine.