The on-sale date is the publication date reported in the U. S. Copyright Office filing found at the Catalog of Copyright Entries, Part 2, Periodicals, New Series, Volume 35, 1940, Number 2. Class B periodical. Copyright number B 449539. 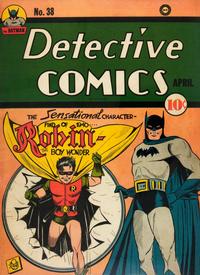 The splash page replicates the cover.

[The Electrical Assassin] (Table of Contents: 4)

First Line of Dialogue or Text
Early evening... great tentacles of electricity splotch the sky above Washington, D.C. to the accompaniment of ominous rumbles of thunder...
Genre
adventure; spy
Characters
Bart Regan; Chick Cavanaugh (Secret Service agent, death); Nell Johnson (villain, death); Carter (villain, a scientist, death)
Synopsis
Bart nearly loses his life when he investigates a scientist's invention that produces lightning, which can be directed to any target the scientist desires, and with which he plans to terrorize the nation and eventually control it.
Reprints
Keywords
Capitol; Washington

First Line of Dialogue or Text
It is the opening night of the opera, all society is present, including the wealthy Mr. and Mrs. Duprey...
Genre
superhero
Characters
The Crimson Avenger [Lee Travis]; Wing; Mrs. Duprey; Mac (Globe-Leader reporter); Mike (Policeman); Mr. Duprey (villain); "Gimpy" Malone (villain); Joe Scalponi (villain)
Synopsis
The Crimson investigates and puts to an end an insideous plan in which wealthy people pay to have their jewels stolen, then get them returned after having collected the insurance on them.
Reprints

No. 1 - Kidnapped, by Robert Louis Stevenson (Table of Contents: 7)

Boys! I'll Help You Get a Daisy Air Rifle for Your Birthday (Table of Contents: 8) (Expand) /

The Kidnaped Singer (Table of Contents: 12)

[The Gambler's Protector] (Table of Contents: 13)

First Line of Dialogue or Text
Cliff Crosby and Dr. Broussard, famous explorers, are now at the Arctic Circle.
Genre
adventure
Characters
Cliff Crosby; Dr. Broussard; Aga (Kingdom Chief); Sabu (villain, phony Kingdom Chief); Sengi (villain)
Synopsis
Having to bail out of their plane over the arctic regions, Cliff and Dr. Broussard are shocked to find African natives living in the arctic with little clothing on. They are brought before the Chief of the Sabu Kingdom and informed about a serum the natives drink that permits them to live in the coldest of weather without clothing!
Reprints

The Case of the Vanishing Train (Table of Contents: 15)

A Sensational Offer to Readers of Detective Comics (Table of Contents: 22) (Expand) /