The Dread of Night (Table of Contents) 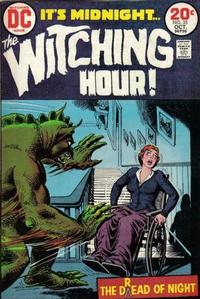 In this issue's letters page Murray Boltinoff, in answer to a reader asking for the identity of the creators of these one page introductions featuring the three witches, says: "Johnny Calnan usually depicts our trio of slyly sinister sisters in some didos, which on occasion also have been drawn by Sonny Trinidad and Buddy Gernales. [...] The script is provided by a television comedy writer, who demonstrates his fondness for this particular mag by writing the gruesome gags. Since he asked us to keep his identity a secret, we've gotta be as silent as a mummy."

The Dread of Night (Table of Contents: 2)

The Day Bill Told Off His Boss (Table of Contents: 3) (Expand) /

Child of Evil! (Table of Contents: 7)

How Joe Solved His "Security Problem"! Or His Key to a Successful Future (Table of Contents: 8) (Expand) /