On sale date from publication date submitted to the U.S. Copyright Office as reported in the Catalog of Copyright Entries, Third Series, Volume 28, Part 1, Number 1, Section 2, Books and Pamphlets Including Serials and Contributions to Periodicals, January-June 1974. Copyright registration number A538836. Registered as a first class book. Copyright given to G. B. Trudeau. 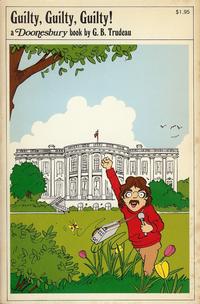 Garry Trudeau acknowledged employing Don Carlton as inker of Doonesbury (Alter 1990). There was a transition during the early 1970s in the lettering of the strip. After about a year (apparently ending in early 1973) during which Trudeau lettered the strip and Don Carlton inked it, Trudeau delegated the lettering to Carlton, who then remained for decades as inker and letterer of the strip (Walker 2010, 30–31). GCD’s credits reflect that the time period covered by this volume appears to begin during the time that Trudeau lettered and Carlton inked, and end during the time that Carlton inked and lettered.
__________
References: