Index revised with information from Saltarella via the GCD Error Tracker and atlastales.com.

Behind the Door! (Table of Contents) 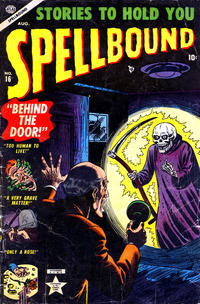 When You Believe (Table of Contents: 1)

Job Number
C-818
Genre
horror-suspense
Synopsis
An escaped con goes after his defense lawyer on Christmas day with the intent to murder him and his wife and child. The boy got a disintegrator gun as his present and he aims it at the convict which provokes fits of laughter. The boy pulls the trigger and disintegrates him.
Reprints

Too Human to Live! (Table of Contents: 3)

Job Number
C-703
Genre
horror-suspense
Synopsis
A human-looking robot employed to work in a factory of mechanical robots resents the conditions of his employment as he doesn't know he's a robot. When he meets a pretty young lady and makes a date with her, he tries to escape the factory, but the other robots take him back to his workstation. He makes a dash for the fire escape but the other robots pursue him and he falls from an open window to smash to pieces on the ground below. The robot supervisor says that it is unfortunate when robots come to think of themselves as different from other robots merely because they look different.
Reprints

Job Number
C-613
Genre
horror-suspense
Synopsis
A woman suspects her husband of cheating on her and so she follows him during the evenings where he is seen giving flowers to young girls. She becomes enraged and sends poisoned candy to her victims. After several deaths reported in the newspaper, her husband reveals that he was delivering flowers to make extra money to buy her a gift. His wife is stricken by remorse for the poisonings, and eats a few of the chocolates the husband has left on the table, which turned out to be poisoned.
Reprints

Job Number
C-774
Genre
horror-suspense
Synopsis
Two brothers get hired as watchmen for a cemetery. One falls in a grave and calls for help. A bystander tries to dig him out and the other brother thinks he's grave robbing and shoots him. A month later, the buried brother returns as a zombie and strangles his brother.

Behind the Door (Table of Contents: 6)

Job Number
C-635
Genre
horror-suspense
Synopsis
A wealthy old man builds a viewing device so powerful that it even displays Death approaching him. He hires bodyguards and builds a vault to hold Death once the beam reveals its presence.
Reprints