The Man in the Cellar! (Table of Contents)

Per atlastales.com "John Severin says this is all Maneely even though J.P.S. signed on cufflink." 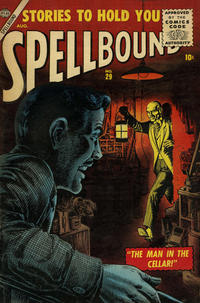 The Man in the Cellar (Table of Contents: 1)

He Walks Among Us (Table of Contents: 2)

Job Number
J-749
Genre
science fiction
Synopsis
An actor realizes that he is actually a robot animated by the thought patterns of a human.
Reprints

They Meet by Night! (Table of Contents: 3)

Job Number
J658?
Genre
science fiction
Synopsis
Some aliens give confederate money to an embezzler in order to purchase samples of technology.
Reprints

Someone Is Following (Table of Contents: 4)

Job Number
J-751
Genre
science fiction
Synopsis
A member of the chronology protection force warns a man not to give an inventor two hundred dollars.
Reprints

The Performer (Table of Contents: 5)

The Hole in the Ground (Table of Contents: 6)

Job Number
J582
Genre
fantasy-supernatural
Characters
Charles Lutwidge Dodgson [Lewis Carroll] (the author)
Synopsis
'Alice in Wonderland' is in reality a story based on an encounter between the author and elves.
Reprints

None Are So Blind (Table of Contents: 7)

Job Number
J523
Genre
science fiction
Characters
Dave Miller (carnival ride owner)
Synopsis
The owner of a carnival ride likes kids so much he doesn't charge them to ride 'the flying carpet' and so is poor. He discovers alien families who have lost their home planet and puts them to work as the successful new 'flying saucer' ride.
Reprints