The Perfect Crime (Table of Contents) 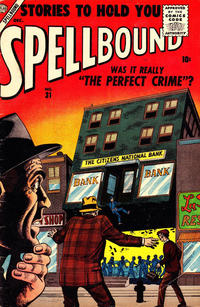 The Betrayer (Table of Contents: 1)

Job Number
K-664
Genre
science fiction
Characters
Philip Clark; Wilson
Synopsis
When Wilson spies a giant rocket craft headed to Earth which will destroy everything when it lands. Clark builds a hideout on the world's most deserted island, Bimur, so he can be sure to survive. However, that's exactly where the ship is going to land.
Reprints

Job Number
K-498
First Line of Dialogue or Text
Connors had brains, and the Great Gambo had a strange talent!
Genre
science fiction
Synopsis
A sleezy booking agent uses a teleporter to get rich quick.
Reprints

He Won't Open the Door (Table of Contents: 4)

Job Number
K-641
Genre
fantasy-supernatural
Characters
Preston; Charon
Synopsis
Preston believes money can get him anything. Searching for Incan treasure he tries to force a ferryman to lead him across a river, but the ferryman is Charon and he's at the River Styx.
Reprints
Keywords
River Styx; South America

The Man Who Didn't Belong (Table of Contents: 5)

Job Number
K-514
Genre
science fiction
Characters
Steve Donner; Jim; Rex Donner; Evelyn; Denise Wallace
Synopsis
Steve rescues Rex from inside the cyclotron but he has no memory of where he came from. Steve starts to resent how perfect Rex seems and how everyone likes him. Eventually Rex steps back into the cyclotron and vanishes. Steve tells his story to Denise then recognizes her as Rex's mother! He realizes Rex was his son from the future and that he can be proud of Rex's achievements.
Reprints
Keywords
cyclotron; time travel

They Dare Not Come (Table of Contents: 6)

Job Number
K-529
Genre
science fiction
Synopsis
The workers in a weather station on Mars become antsy about supplies arriving but the commander maintains control. All of them are human-like robots who need the fuel to keep running.
Reprints
Keywords
Mars

Man in a Trance (Table of Contents: 7)

Job Number
K611
Genre
fantasy-supernatural; science fiction
Characters
Ronnie Flynn; Ken Flynn; Dick Flynn; Oliver Flynn; Nancy Drake; Lord Hubert
Synopsis
Ronnie believes the past still exists and invents a formula to enter the 'existing' past so he can find out what became of the Drake Diamond. It works, but he falls in love with Nancy and fears if he takes the diamond in the present she'll be arrested for the theft in the past so he leaves it alone.
Reprints
Keywords
Drake Diamond; Newcastle; time travel