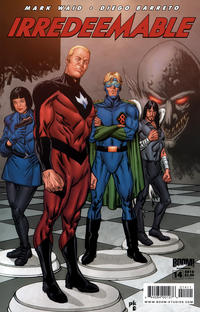 First Line of Dialogue or Text
Jackie'll get the money!
Genre
superhero
Characters
Orian; The Paradigm [The Survivor [Charybdis]; Qubit; Volt; Kaidan; Gilgamos; Bette Noir]; Alexander the Great (flashback); Samsara (body only); Modeus; The Plutonian (cameo)
Synopsis
Gilgamos escapes military custody as he recalls a similar imprisonment centuries ago. Half of The Paradigm then joins forces with Orian to confront The Plutonian, which Qubit warns will not end well.
Reprints

Story is untitled beyond series title.

There Is a Great One Sleeping That Will Hear... (Table of Contents: 6) (Expand) /