Back cover mentions that 21 pages of this book have never been published before. 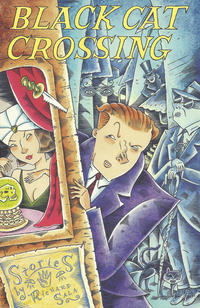 Genre
detective-mystery
Synopsis
A mysterious alleyway with a man drawing a cat's face on the wall and a woman with a bird mask, along with other odd characters.

Fellowship of the Creeping Cat (Table of Contents: 2)

Genre
detective-mystery
Synopsis
Avery is hired by an old woman to find out who stole her cat, but the mystery is much deeper and older than just the cat.

Page count includes an illustration page at the beginning which may or not be part of the story.

Where Is Christine Brooder? (Table of Contents: 5)

First Line of Dialogue or Text
Next time I should just go to Burger King.
Genre
detective-mystery
Synopsis
A normal man sits in a restaurant surrounded by nefarious people.

Synopsis
A man is obsessed with television.
Reprints

One of the Wonders of the World (Table of Contents: 9)

Synopsis
A paranoid man with the mind of an ape builds a monument on his house to a dead dog.
Reprints

A Newlywed's Heartache (Table of Contents: 10)

Genre
drama
Synopsis
A woman learns that her husband paints people's pictures before he kills them.
Reprints

The Somnambulist (Table of Contents: 11)

Genre
drama
Synopsis
A man is hypnotized into committing robberies, but remembers nothing about it.
Reprints

Synopsis
A man receives a package containing a log and a saw.

Another Mad Doktor (Table of Contents: 13)

Synopsis
A mad doctor reminisces about his crazy schemes and how he is always defeated.
Reprints

Synopsis
A man is invited to a wedding as a guest but, through trickery, becomes the groom.
Reprints

Synopsis
A vet's assistant is confronted about selling animal organs for human transplants.

Story inspired by Subliminal Seduction by Wilson B. Key.

First Line of Dialogue or Text
There goes old Parker again.
Synopsis
A man falls out a window.

Synopsis
A "lady-of-the-night" smokes a cigarette.

First Line of Dialogue or Text
Detours and darkened doorways.
Synopsis
Text about the comic and an illustration.