[Create Your Own Beach] (Table of Contents) 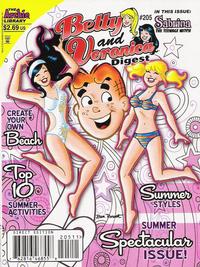 [Moonshadow Rise of the Ninja] (Table of Contents: 1) (Expand) /

Genre
humor; teen
Characters
Betty Cooper; Jughead Jones; Veronica Lodge; Marcy Lodge (Veronica's cousin)
Synopsis
Veronica becomes an internet "Viewtube" sensation as "Volleyball Girl" when she is videoed being clobbered by a volleyball by Jughead. She gives up when a repeat attempt lacks spontaneity and goes for a swim with Betty. In the last panel Jughead is phone filming the next great "Viewtube Video" of a shark fin headed for the girls.
Keywords
Internet video sensation; viewtube; volleyball

12 pages with no explicit 2 part break in the digest.

Genre
teen
Characters
Veronica Lodge; Archie Andrews; Cheryl Blossom; Betty Cooper
Synopsis
Veronica spends so much time trying to keep Archie away from Cheryl and Betty that she doesn't have time to enjoy being with Archie.
Reprints

Credits from the index of the original printing, no credits printed in this digest.

Illustration used as the title page for the next section featuring Sabrina reprints.

Lifestyles of the Confused and Complicated (Table of Contents: 14)

Gucci is spoofed as Guchi.

Isle Be Your Dream Date! (Table of Contents: 22)