The Beyonder--Berserk! (Table of Contents) 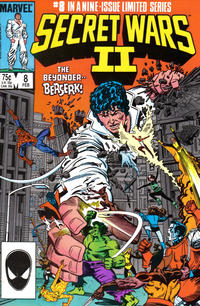 Genre
superhero
Characters
the Avengers [the Black Knight [Dane Whitman]; Captain America [Steve Rogers]; Captain Marvel [Monica Rambeau]; Hercules; the Sub-Mariner]; the Beyonder; the Hulk; the Molecule Man; the New Mutants [Cannonball; Warlock; Wolfsbane [Rahne Sinclair]; Magik [Illyana Rasputin]; Dani Moonstar; Karma; Magma]; Spider-Man; Volcana; the X-Men [Colossus; Magneto; Phoenix [Rachel Summers]; Rogue; Shadowcat [Kitty Pryde]; Wolverine]; CAMEO FLASHBACK: Dazzler; Dr. Strange; the Puma
Synopsis
Frustrated by his time on Earth, the Beyonder consults with the Molecule Man and talks about everything that has happened to him. Disgusted by the affection Volcana shows to Owen (and angry that he cannot find love or purpose himself), the Beyonder throws a fit and vows to destroy the multiverse in twenty-four hours. Owen panics and futilely tries to prepare for doomsday. Feeling backed into a corner, he attacks the Beyonder with all of his powers (not knowing that Spider-Man has already talked the big B out of his destructive plans). The Beyonder decides to go ahead and annihilate everything.
Reprints