Beware the Power of Khan! (Table of Contents) 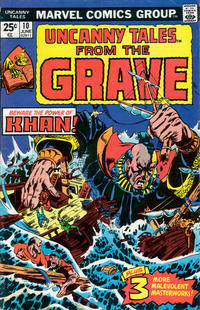 The Strange Magic of Master Khan! (Table of Contents: 1)

Job Number
T-796
Genre
horror-suspense
Characters
Hawk Gormey (only appearance); Master Khan (introduction)
Synopsis
A pirate steals the ship of an Asian sorcerer. The ship's owner curses the thieves, shrinking the ship and imprisoning them in a glass bottle.
Reprints

The Dummy and Me! (Table of Contents: 2)

Job Number
[T-746]
Genre
horror-suspense
Characters
Hugo; Dummy (only appearance for both)
Synopsis
Some gangsters come for a ventriloquist who has unpaid gambling debts. They corner him in the alley and shoot him, not realizing that it was the puppet who made his decisions all along.
Reprints

Narrated in the first person by the puppet.

The Man in the Glass Cage (Table of Contents: 3)

Genre
horror-suspense
Characters
Joe Phelps; Anita Rogers; Bob
Synopsis
A sound engineer tries to kill a girl who spurned him using sound waves. When they fail, he is confused, and, is killed by the waves which didn't affect the secretly hard-of-hearing girl.
Reprints

The Silent Street! (Table of Contents: 4)

Job Number
[M-394]
Genre
science fiction
Synopsis
A police officer makes his night rounds thinking that nothing interesting ever happens in the neighborhood while two aliens are conducting a life or death struggle among the rooftops.
Reprints