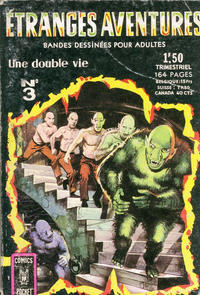 Genre
science-fiction (science fiction)
Synopsis
Professor Axoll finds a buried humanoid creature which turns out to be a policeman from an underground civilization.
Reprints

Genre
polar; policier (detective-mystery); science-fiction (science fiction)
Characters
Star Hawkins; Ilda
Synopsis
Ilda takes a second job as a movie actress but the producers are only trying to trick her into giving them information about Star's cases.
Reprints

Genre
super-héros (superhero)
Characters
The Atom [Ray Palmer]; The Black Phantom (villain); Professor Morton Oldham; Jean Loring
Synopsis
A strange side-effect from the Atom's trips through the Time Pool causes trouble for him in the present as he tries to defeat the Black Phantom.
Reprints