The central figure appears to be by John Celardo, but it's more likely a copy. 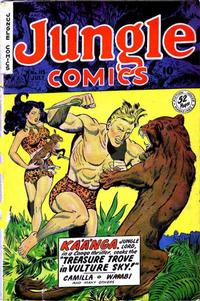 First Line of Dialogue or Text
Like a huge slithering snake, the safari slowly crawled through the dense, tangled underbrush...
Genre
animal; jungle
Characters
Simba; Townsend; Nancy Townsend; Varma (cheetah); Mrs. Simba
Synopsis
Simba prevents Varma killing a lost white child. Varma plots revenge with the aid of the jackals. While the jackals attack Mrs. Simba, Varma makes off with one of Simba's cubs. Simba follows Varma and kills him and then leads the lost child back to her father's safari.
Keywords
elephants; jackals; leopards

Though Varma is identified as a cheetah, the animal is clearly a leopard, as it can climb trees, something that cheetah can't do.

The Cat Tribe (Table of Contents: 3)

Spoor of the Demon Ape (Table of Contents: 5)

First Line of Dialogue or Text
The waking hours of Wambi, the jungle boy, are crowded with the endless struggles to stay alive in an unfriendly jungle!
Genre
jungle
Characters
Wambi; Tawn; Ogg; Maggo (macaw); Ageelas (African tribel); Ahili; Arungo; Kuka (antelope); Sirdah (tiger)
Synopsis
The Ageelas are driven from their village into Wambi's jungle by the followers of the raider Arungo. Wambi and Tawn persuade Arungo's elephants to rebel against their masters and drive them away from the Angeela village.
Keywords
elephants; howdahs

First Line of Dialogue or Text
The rhythmic voice of the ceremonial drum rose from the dense, green-matted jungle...
Genre
jungle
Characters
Tabu; Membesis (African tribe); Otanu; Shamatar; Turu; Tongo; Tigo
Synopsis
Otanu seeks to prevent Tongo's ascension to the Membesi throne. He conjures the evil goddess, Shamatar, and promises her a soul in return for her help. Shamatar sends a leopard to attack Tongo during a zebra race, allowing Otanu to win. Tabu sets a trap to discover who is behind the attack on Tongo with a "truth fluid" that all are willing to drink. save Otanu. When Otanu attempts to flee, Shamatars's leopard attacks and kills him and Shamatar takes his soul as her promised pay.
Keywords
astral projection; kingship rites; leopards; saddle zebras; soporific drugs

located on upper half of page

If Polio Hits Your Area This Year... (Table of Contents: 10)

Synopsis
Advice on how to avoid contracting polio from the National Foundation for Infantile Paralysis.

located on bottom half of page