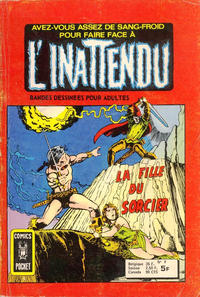 Genre
espionnage (spy)
Characters
Nick Fury L.M.D.; HYDRA; Agent R (armored suit); Nick Fury; Agent C; Agent L; Imperial Hydra ["The Master"] (unnamed); Agent H [Laura Brown] (unnamed); Tony Stark; Corporal Charles Atkins (Serial #35067731; HYDRA agent)
Synopsis
HYDRA repeatedly tries to murder Nick Fury before he can recruited to head SHIELD. The agent in charge of the operation, Agent L, is executed for his failure by Agent H. After reminiscing about his days in WW2, Fury meets Tony Stark, who introduces him to the SHIELD board of directors, then shows him a film detailing HYDRA's operations. After Fury uncovers a bomb in the room and dispatches it, along with the spy who planted it, he realizes the danger facing the free world and takes the job.
Reprints

Genre
horreur-suspense (horror-suspense)
Synopsis
Martin Ballard is pursued by the curse of the treasure of Genghis Khan, which he once stole.
Reprints