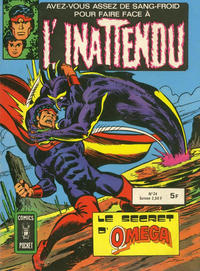 Genre
espionnage (spy)
Characters
Number 72 (HYDRA commander); Bulls-eye (assassin); Dum Dum Dugan; Nick Fury; Agent 97 (HYDRA); Eddie (doorman); Laura Brown; Number 94; HYDRA; Country Joe and The Fish (rock band)
Synopsis
HYDRA hires the services of Bulls-eye, a paid assassin, to kill Nick Fury. Fury and Laura attend a concert by Country Joe and The Fish in Central Park when Bulls-eye strikes apparently assassinating Nick Fury in full view of horrified onlookers. Abruptly, Hydra leader number 72 decides this would be the moment SHIELD would expect HYDRA to strike and changes his plans for an attack. Instead, SHIELD converges on Central Park and corner Bulls-eye, who decides to shoot it out with them but Dugan kills him.
Reprints

Bulls-eye's only appearance; not related to the Marv Wolfman villain from Daredevil #131 (March 1976).