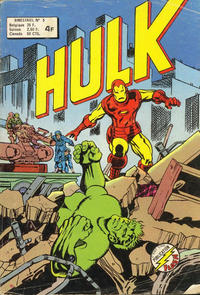 Genre
science-fiction (science fiction)
Characters
Joe Morgan; Groff
Synopsis
A fugitive meets a man from the future who offers to switch places. When he arrives, however, he finds that the man was another criminal, a shape-shifting Uranian. The authorities imprison him, assuming his form is a disguise.
Reprints

Genre
science-fiction (science fiction)
Characters
Urru
Synopsis
An advanced civilization sends a mugger to a prison planet. Only a few moments on this world full of war, crime and disease make him go straight in order to avoid ever again coming back to Earth.
Reprints

Genre
science-fiction (science fiction)
Characters
Elektro (introduction, origin); Wilbur Poole
Synopsis
A scientist creates a computer so sophisticated that it can out think human beings. It hypnotizes the scientist into building it a huge robot body so that it can move and threaten human cities to conquer them. As it gets further from the scientist, the hypnosis fades, and the scientist regains his own will. He rushes Elektro, and enters the robot frame from a small door in its heel, and removes the power source, thus saving humanity.
Reprints

Genre
science-fiction (science fiction)
Synopsis
Scientists find a seemingly primitive man, but they discover that he is really from a future where nuclear war has destroyed civilization.
Reprints

Genre
super-héros (superhero)
Characters
Thor [Don Blake]; Avengers [Iron Man [Tony Stark]; Giant-Man [Henry Pym]; Wasp] (flashback); Sub-Mariner [Namor] (flashback); Odin; Hulk [Bruce Banner]
Synopsis
Two rival fan clubs are debating who is stronger, Thor or the Hulk? Thor happens to be passing by and drops in to offer his opinion. He relates the story of their epic battle (in Avengers #3) and describes a previously unseen scene in which he and the Hulk tussle. He goes into deep thought and when pressed, cannot say who is the stronger because he has insufficient proof! Days later, the Hulk gives thought to his meeting with Thor and vows that next time, Thor will be smashed forever!
Reprints

The majority of this story is a flashback to the events of Avengers #3 (both previously shown and new scenes elaborated on).