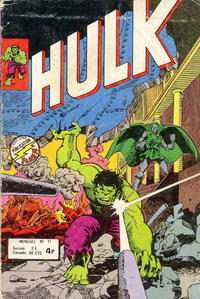 In this story, Doc Samson shows up with his hair much shorter and explains that, just like his Biblical namesake, the shorter his hair is, the less super powered strength he possesses.

Genre
fantasy (fantasy-supernatural); super-héros (superhero)
Characters
Thor; Loki; Balder; Sigurd (introduction)
Synopsis
When out walking with Balder and Loki, Thor is challenged to a duel by Sigurd. They fight and Thor knocks Sigurd to the ground repeatedly. However, each time Sigurd gets up he is stronger than ever. Balder remembers the key to Sigurd's increasing strength. He is a son of the Earth Sprites; his strength comes from the very ground itself. Thor hooks his hammer under Sigurd's belt and flings him skywards where he will be stranded on a deserted asteroid. The three gods continue their way home, with Loki disappointed that Thor was not defeated.
Reprints

Genre
super-héros (superhero)
Characters
Hulk [Bruce Banner]; Thunderbolt Ross; Betty Ross; Glenn Talbot; The Colossus (villain); The Sphinx (villain); Horusians [Duamutef; Imset; Qebehsenuf] (villain); Dr. Igor Drenkov (cameo); Rick Jones (cameo)
Synopsis
Hulk drags a Russian war ship to the ocean floor. As he is trying to make his way home from Latveria, he ends up in the Sahara desert and stumbles upon a movie set. The director gets the idea to put the Hulk in his film but is thwarted when the Hulk transforms into puny Banner. Bruce gets abducted by aliens who have arrived to witness a gladiatorial contest. When Bruce accidentally nullifies one of the stone combatants, the Hulk is left to fight the Colossus on his own. Meanwhile, back at Gamma Base, Ross unveils his plans for a military installation designed to take down the Hulk.
Reprints

As of last issue, General Ross and his crew thought the Hulk was dead but in this issue, Ross has made elaborate plans for nullifying or killing him.

First appearance of the land of Varinheim.