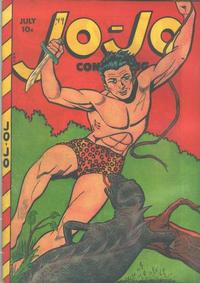 The Doomed World (Table of Contents: 1)

Maneuvers and Murder (Table of Contents: 2)

Movies In the Jungle (Table of Contents: 3)

First Line of Dialogue or Text
Three days ago I had been resting in an...
Genre
jungle
Characters
Henry Travers; William Cavenshire; Theresa Martinez [Sadie Kelly]

The Pattern Carved By Fate (Table of Contents: 4)

An alternate title: "Goddess of Rock", appears in the opening caption; the title above appears where the feature name would usually be.

The Dauntless Dowager (Table of Contents: 5)

First Line of Dialogue or Text
Jo-Jo has his troubles in the jungle - and he thought...
Genre
adventure; jungle
Characters
Jo-Jo; Matilda Marshall; Tom Payne

Jo-Jo's last appearance, but continues as Jungle Jo a few months later (the first issue, unnumbered, has Jo-Jo stories with his name blanked out on the splash pages).