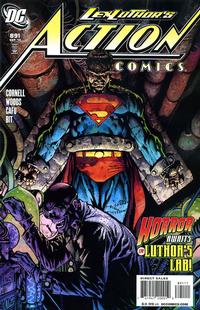 Genre
superhero
Characters
Lex Luthor; Og (dream); Mister Mind; Robot Lois Lane [RoboLois]; Big Blue (dream); Deathstroke (cameo)
Synopsis
Lex is forced to dream various scenarios by Mister Mind: A caveman bringing fire to his people, Dr. Frankenstein, a western sheriff, and Super-Lex. But Lex is able to fashion the dreams himself, and eventually is able to take control and kick Mister Mind off of the building's roof. Despite not knowing who is behind Mister Mind, Luthor continues his quest for the Black Lantern ring energy, and hires a guide to the first location.
Reprints