The Spectre's skin is still grey and colored incorrectly in reprints. 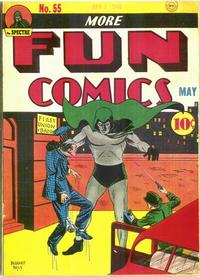 Genre
superhero
Characters
The Spectre [Jim Corrigan]; Wayne Grant; Zor (villain); Clarice Winston (villain)
Synopsis
The Spectre meets a foe who is as powerful as himself and works feverishly to overpower him before he can harm Clarice.
Reprints

First Line of Dialogue or Text
These giant bee hives are only to be found in far off India...
Genre
non-fiction

First Line of Dialogue or Text
The 662 is based at the Atlantic end of the Panama Canal...
Genre
war
Characters
Lt. Bob Neal; Tubby
Synopsis
Enemy spies, sailing in a disguised British freighter, try to blow up the Panama Canal.

[The Menace of Wotan] (Table of Contents: 8)

Genre
superhero
Characters
Doctor Fate [Kent Nelson] (introduction); Inza Cramer (Fate's confidant); Wotan (villain, introduction)
Synopsis
Wotan kidnaps Inza to get at Dr. Fate, so Fate goes after him in order to rescue her and seemingly kills him in the end.
Reprints

Cover to this issue not reprinted in the archive edition.

No. 2 -- Adventures of Baron Munchausen, by Rudolf Raspe (Table of Contents: 9)

First Line of Dialogue or Text
Desmo and Gabby have been battling the 'Society of Assassins'...
Genre
adventure; aviation
Characters
Captain Desmo; Gabby; Joyce Allen; Society of Assassins (villains)
Synopsis
Gabby disguises himself as Joyce's father as part of a trap for the assassins.