Based on the Yogi Bear television series produced by William Hanna and Joseph Barbera.

No month is given on the cover or in the indicia. Based on the copyright dates of this issue and others in the series released around the same time, one can determine that this issue was published with other Four Color issues bearing a "February-April 1962" cover date.

This issue exists in ad and non-ad versions, per Error Report #4239, by Karl Wilcox. See the index for Four Color #1349.

Black and white photograph of the United Nations building in New York City is used as the background. Pencils and inks credits from Alberto Becattini (May 2007) and Karl Wilcox (April 2010). 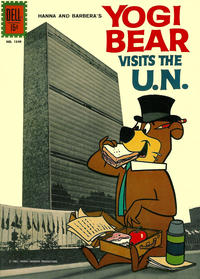 The Route (Table of Contents: 1)

Inside front cover; black and white. Pencils and inks credits from Alberto Becattini (May 2007) and Karl Wilcox (April 2010).

Pencils and inks credits from Alberto Becattini (May 2007) and Karl Wilcox (April 2010).

Genre
anthropomorphic-funny animals
Characters
Yogi Bear; Boo Boo
Synopsis
Yogi is given a pile of papers to study for the air traffic meeting. He turns them into paper airplanes.

Inside back cover; black and white. Pencils and inks credits from Alberto Becattini (May 2007) and Karl Wilcox (April 2010).