The Strange Lives of Edmund Blake! (Table of Contents) 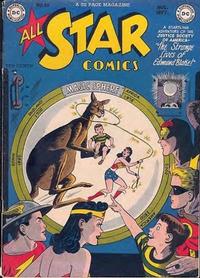 The Strange Lives of Edmond Blake! [Part I] (Table of Contents: 2)

Genre
superhero
Characters
Justice Society of America [Green Lantern [Alan Scott]; Hawkman [Carter Hall]; Wonder Woman [Diana Prince]; The Flash [Jay Garrick]; Black Canary [Dinah Drake]; Dr. Mid-Nite [Dr. Charles McNider]; The Atom [Al Pratt]]; Edmund Blake; Helen Blake (Edmund's sister); Dr. Starret; Dr. Jarman
Synopsis
A young boy is critically ill and needs an operation, but he doesn't seem to care what happens to him. One of the doctor's approach the boy's sister about this, but she tells him that the boy admires the JSA, and a visit by them may cheer him up. Local TV stations then put the story all over the airwaves and the members decide to go to the hospital and perform for the youngster, hoping that will strengthen him enough to endure an operation. He perks up, but sinks back into a dreamworld. Wonder Woman decides to use her Magic Sphere and inject the members into his dreams in order to save him.
Reprints
Keywords
Blackout Bomb; CCB-TV; Civic City; Golden Lasso; Magic Sphere; Midcity Hospital; Power Ring

Artist credits from Craig Delich. Splash page pencils are by Peddy, not by Hasen. Inker credits formerly given to Bob Oksner.

Genre
superhero
Characters
Justice Society of America [The Flash [Jay Garrick]; Green Lantern [Alan Scott]; The Atom [Al Pratt]; Dr. Mid-Nite [Dr. Charles McNider]; Black Canary [Dinah Drake]; Wonder Woman [Diana prince]; Hawkman [Carter Hall]]; Edmund Blake; Helen Blake; Dr. Jarman; Joan Nevins; Mrs. Hooker (Joan's housekeeper); Steve Somers [also as Joan's father] (villain, Joan's neighbor); X-Criminal Band (villains)
Synopsis
Another four months into the future sees Edmund racing with the Flash to Joan's home, discovering that she has received a threatening letter. The Flash discovers that Joan's jealous neighbor is responsible. This event perks Edmund up, but he realizes all the things the Magic Sphere showed him were dreams. When the JSA leave his room, Edmund wakes and notes the JSA in the Magic Sphere in trouble against some crooks. When no one believes this threat to the JSA, Edmund leaves the hospital and goes to their aid, being captured in the process. The JSA free themselves and round up the crooks.
Reprints
Keywords
Golden Lasso; Magic Sphere; Power Ring

The JSA makes Edmund Blake an Honorary Member at the end of the story.

[How an Electric Motor Works; Drawing Pictures with Sound] (Table of Contents: 8)

Genre
non-fiction
Characters
The Flash [Jay Garrick]; Green Lantern [Alan Scott]
Synopsis
Green Lantern explains the principles behind how an electric motor works, while the Flash explains how readers can draw mysterious and beautiful pictures by the use of vibrations only.

This filler is NOT found in the Archives.

This text story is NOT found in the Archive.

The Littlest Planet! (Table of Contents: 13)

Inker credit from Craig Delich; originally given to Howard Purcell.

This story is NOT found in the Archive.

This PSA was NOT reprinted in the Archive.