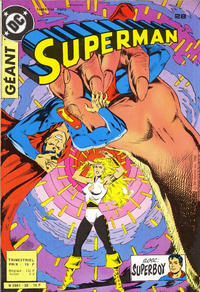 Yellow Peri first met Superboy years earlier and he threw the book into outer space, which is where it is returning from in this issue.

Non-advertised, pre-Crisis on Infinite Earths mini-series four-panel-sequence-cameo by The Monitor (only hands shown with voice).