This issue contains a C. C. Beck illustrated advertisement (1/4 page) for the Captain Marvel Power Siren, which could be purchased at newsstands or obtained free if the reader cut out and mailed in three certificate coupons that appeared in Fawcett's Whiz Comics, Master Comics and Slam-Bang Comics. This ad is reprinted in Alter Ego #141 (August 2016), page 79. 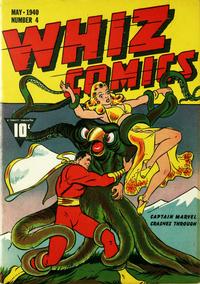 [Beautia for President] (Table of Contents: 1)

Genre
superhero
Characters
Captain Marvel [Billy Batson]; Dr. Thaddeus Bodog Sivana (villain); Beautia Sivana (villain)
Synopsis
Beautia begins her campaign to be elected President of the United States, and Sivana tells her that once she is elected, he will have every government official murdered, every citizen executed who didn't vote for her, steal all the gold from the U.S. Treasury, and blow up the White House, replacing it with a palace for her.
Reprints
Keywords
Shazam; The Seven Deadly Enemies of Man

Captain Marvel also wears button down flap in this issue on splash page, pages 10 and 12.

The last 1/4 page of the story is an illustated ad, with Captain Marvel, for the Captain Marvel Power Siren (the World's Mightest Whistle).

First Line of Dialogue or Text
Choctaw Indians were used by the U.S. Army...
Genre
non-fiction

[The Plots of the Braddock Brothers] (Table of Contents: 3)

[The Mask Steals a Submarine] (Table of Contents: 4)

[The Coming of Daniel Doom] (Table of Contents: 7)

[The Emerald of Rooirand] (Table of Contents: 8)

[The Rescue of Boyville] (Table of Contents: 9)