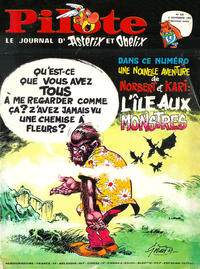 First part of the 47 pages long story "L'ile aux monstres" which appears in numbers 420 - 433 of the magazine.

First appearance of Valerian and first part of the 30 pages long story "contre les mauvais rêves" which appeared in numbers 420 - 432 of the magazine.