The Vanishing Vandals! (Table of Contents) 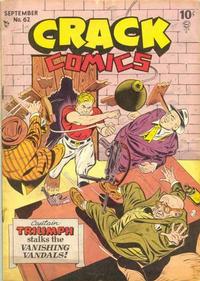 The Vanishing Vandals! (Table of Contents: 1)

Title from cover.
End of series.
Final Golden Age appearance for Captain Triumph (except for the text story later in this issue). He appears next in History of the DC Universe (DC, 1986 Series) #1 (January 1987) -- but he was seen earlier on the cover of All-Star Squadron (DC, 1981 Series) #1 (September 1981).

First Line of Dialogue or Text
Oh, dear!
Genre
humor
Characters
Molly Maloney
Synopsis
A bikini-clad Molly has to rush to attend a session with an artist. In a change from the usual routine, this time she has to put on more clothes to pose.

With the end of Crack Comics, Molly the Model will now appear in random Quality Comics titles. Her next appearance is in Egbert (Quality Comics, 1946 Series) #15

[The Missing Agent] (Table of Contents: 4)