Adventures into the Unknown #7
(October-November 1949) 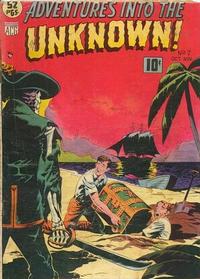 The Swami's Secret (Table of Contents: 1)

Genre
horror-suspense
Characters
Swami Heshug; Bill Carlton; Trudy Roland; "Cat" Harris
Synopsis
Bill Carlton and Trudy Roland, reporters at the Graphic newspaper, team up to take down swindling spiritualists. They expose Swami Heshug, who uses burning herbs to raise the spirit of executed killer, "Cat" Harris. Accidentally getting a picture of the spirits of Heshug and Harris together, Bill plans to use a hazel twig to stop Heshug. Trudy is captured by Heshug. When Bill goes to the swami's lair, he loses the hazel. The herbs burn out, and Heshug loses control of Harris' spirit. Using a silver letter opener, he tries to show dominance, but ends up killing himself and Harris' spirit.
Reprints
Keywords
ghosts; reporters; spiritists; swami

The Ape Demon (Table of Contents: 3)

Genre
adventure; horror-suspense
Characters
Dr. Vance; Link; Jean
Synopsis
Dr. Vance, assisted by a woman named Jean and a man named Link, sets out in the jungles of Bengal to track down the legendary Hanuman Ape. This is in spite of native warnings to stay away from the supernatural creature, as it is said to be kept in the jungle by the god, Siva. Dr. Vance persists in the hunt and captures the. Jean and Link discover a bevy of statues in the jungle looking exactly like the ape. Taking the ape on board a ship, Dr. Vance is soon mastered by the creature. That is until Jean uses a talisman representing Siva to release his soul and return the ape to a stone statue.
Reprints
Keywords
apes

The Mummy's Cloth (Table of Contents: 4)

Timeless Is the Night (Table of Contents: 5)

Drums of the Undead (Table of Contents: 6)

Genre
horror-suspense
Characters
Sheila; Bill; Erzulie Bocor; Dr. Wenrod
Synopsis
Illustrator Bill and his friend Sheila go to the museum to photograph the display on Haiti. There, the pair observe a woman stealing a drum. Bill takes a picture of the woman With the assistance of the museum's curator, Dr. Wenrod, they discover the woman is the Voodoo Goddess, Erzulie Bocor. Erzulie Bocor turns Sheila into a zombie in a bid to get the picture Bill took of the Zombie Goddess.
Reprints
Keywords
zombies

The World beyond the Mirror (Table of Contents: 8)

Genre
fantasy-supernatural; horror-suspense
Characters
Alice
Synopsis
After reading a book on ghost stories from her uncle's library, Alice looks into the mirror. She is transported into the other side, where friendly ghosts fear the living.
Reprints
Keywords
ghosts

The Case of the Roman Curse (Table of Contents: 9)

This story has great similarities to the two other Christopher Fenn stories. In all stories, he faces off with the ghosts of Roman soldiers and is assisted by Ghost Druids.