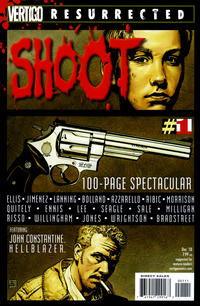 This story is published here for the first time, though it was completed in 1999, scheduled for Hellblazer (DC, 1988 series) #141. It was not released at that time due to the April 20, 1999 shooting deaths at Columbine High School.

The Kapas (Table of Contents: 2)

Genre
drama
Synopsis
A British expedition along the Silk Road in Chinese Turkistan encounters a native means of execution by torture.
Reprints

Genre
fantasy-supernatural; war
Synopsis
A discarded toy tries to warn the others about a coming batch of new toys.
Reprints

Nosh and Barry and Eddie and Joe (Table of Contents: 5)

Genre
war
Synopsis
A fishing trip with four war buddies results in horrible revelations about their conduct in battle.
Reprints

Genre
drama
Synopsis
An oncologist can only see women as potential cancer victime, including his fiancee.
Reprints
Keywords
cancer

The Death of a Romantic (Table of Contents: 7)

Genre
drama
Synopsis
A woman becomes obsessed with the life of a long-dead minor poet.
Reprints

It Takes a Village (Table of Contents: 8)

Genre
fantasy-supernatural
Synopsis
The mayor of a small town in Europe engages various supernatural creatures to menace his townspeople so they will bond in a mutual cause.
Reprints