On sale date as given in the copyright application as listed in the Catalog of Copyright Entries, Periodicals, July-December 1949, page 153, registration number B205424.
Copyright 1949 by Hillman Periodicals, Inc. 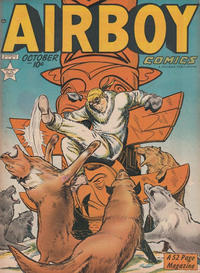 [The Sentinel of the North] (Table of Contents: 1)

[The Acrobats of Atlasburg] (Table of Contents: 2)

Genre
horror-suspense
Characters
The Heap [aka The Ghost of the Forest] [Baron Eric von Emmelman]; Herr von Denn (Kurt's father); Kurt von Denn (champion athlete, death); Hilda Schoen; Dondo the Dwarf (Kurt's brother, death); the Schmidt Boys [Carl; others un-named] (villains, all die)
Synopsis
Dondo feels pain from the scorn and fear of the local townspeople who make fun of him and tells his troubles to The Heap, the only one who will listen to him. When Kurt is found dead, the town blames Dondo, with his powerful arms capable of committing the crime, and believing he was jealous of the up-coming marriage of his brother, wanting to marry Hilda himself.
Reprints
Keywords
Atlasburg

Pencils and inks credits from Hames Ware via a private e-mail to Roy Thomas (22 March 2013); the previous indexer credited the inks to Paul Reinman.
The story title is taken from the table of contents of Roy Thomas Presents the Heap (PS, 2013 series) #2.

The Maid O'Bristol (Table of Contents: 4)