This issue went on sale on time. "Printed by Quad/Graphics, Montreal, QC, Canada. 11/17/10."
This issue has variants: 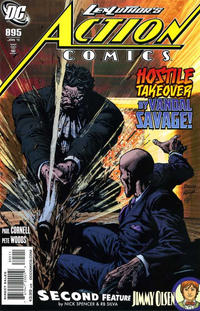 Story continued from the previous issue and continues in the next issue. There are flashbacks to earlier meetings of Vandal Savage and Luthor during Flash #124 (1997) and Salvation Run (2008).