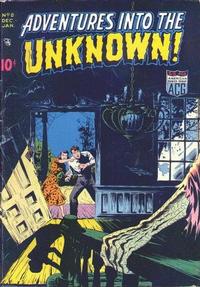 The Evil Ones! (Table of Contents: 1)

Genre
horror-suspense; science fiction
Characters
Mary; George Bailey; Bud Palmer
Synopsis
George Bailey takes an experimental rocket faster than anyone has previously reached. He sees ghost-like creatures called the Evil Ones. Good spirits try to help George, but they can do little. The Evil Ones show him disastrous events like his friend dying in a fight, his fiance Mary falling off a cliff, and a devastating explosion at the airfield. George awakes from his unconscious state to find he survived the crash of his plane, but he is powerless to stop the events foretold to him by the Evil Ones.
Reprints
Keywords
experimental airplane; ghosts

The Ghost from Algol (Table of Contents: 2)

Genre
horror-suspense; science fiction
Characters
Ken; Nancy; Terry
Synopsis
Terry is a scientist working on a "spectroscope", a device that creates stellar rays. Terry wants to eliminate Ken, Terry's rival for Nancy's affections. Terry's rival for Nancy's affections, Terry sets the spectroscope on high. His plans to have Ken trapped in a burst of stellar rays backfires, and Terry dies instead. Terry's ghost is infected by a creature of evil from the planet Algol. The ghost from Algol hounds Ken and Nancy, and they crash their car. Ken is turned into a ghost, yet is able to save Nancy when she is trapped by the spirits controlled by the Ghost of Algol in Terry's home.
Reprints
Keywords
ghosts

The Little Fellah (Table of Contents: 5)

The Sargasso Specter (Table of Contents: 6)

Genre
fantasy-supernatural
Characters
Cora Bryce; Neil; Spike
Synopsis
Cora Bryce predicts the next appearance of the Sargasso Sea, the graveyard of lost ships, but it's not easy to plunder their treasures due to the Sargasso Specter.
Reprints

The Man Who Went to the Devil (Table of Contents: 7)