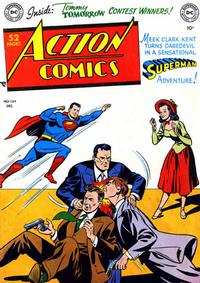 Jimmy's Biggest Christmas (Thanks to Dad) (Table of Contents: 1) (Expand) /

Formerly credited to Bill Woolfolk, but it's not in Woolfolk's records as described by Martin O'Hearn at Martinohearn.com One of the earlies stories in which Lois accuses Clark of being Superman.

Badmen of Mars! (Table of Contents: 4)

Formerly credited to Otto Binder, but not in Binder's records as printed in Alter Ego 147.

The Green Arrow and the Red Feather Kid (Table of Contents: 18)