On sale date from the publication date and the volume number found at the Catalog of Copyright Entries, Part 2, Periodicals, New Series, Volume 35, 1940, Number 2. Class B periodical. Copyright number B 451179. Volume number not listed in the comic indicia itself. 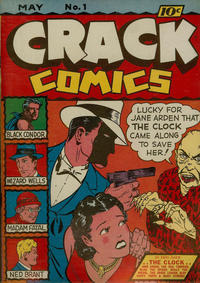 [The Story of Pug Brady] (Table of Contents: 1)

First Line of Dialogue or Text
Varied are the headlines that temporarily displace those screaming of war, sabotage, hate and persecution...
Genre
detective-mystery; superhero
Characters
The Clock [Brian O'Brien]; Pat "Pug" Brady (ex-heavyweight boxing champion, introduction); The Big Shot [Mayor Kozer] (villain, introduction, death); Gaston; John Dooly; Dooly's daughter; Tony; Captain Kane
Synopsis
A down and out-of-luck former heavyweight champion boxer and All-American fullback tries to steal Brian's watch. Later he follows the Clock and saves him from harm by Mayor Kozer, but kills the man in the process. Brian then covers for Brady, disguises himself as the Mayor and infiltrates the gang Kozer once led.
Reprints

First Line of Dialogue or Text
When that phoney Jim Southern heard me say a big detective was here, he jumped.
Genre
drama; detective-mystery
Characters
Jane Arden; Jim Southern [Tim Stratton]; Sue; Clarence
Synopsis
Jane does a bit of research on Jim Southern when she suspects that there is something phoney about him.
Reprints
Keywords
soap opera

Continued from Feature Comics #31. The Jane Arden feature spans two pages and shares .25 of each page with a Lena Pry story. Each story page also includes a paper doll of Jane Arden and clothing.

First Line of Dialogue or Text
But, Lena... Th' men might git mad if we ups an' refuses t' work.
Genre
humor
Characters
Lena Pry
Synopsis
Lena leads a strike against the men to do no more work.
Keywords
Sparrow Gulch; strike

The Lena Pry story spans two pages with 75 percent of each page taken up by a Jane Arden feature.

The Jane Arden feature spans two pages and shares .25 of each page with a Lena Pry story. Each story page includes a paper doll of Jane Arden's wardrobe for men.

The Lena Pry story spans two pages with 75 percent of each page taken up by a Jane Arden feature.

The Space Legion was set in the future, when all nations of Earth were at peace.....but not so in space. Braddon commandered the ship "Mercury" and his home base was the city of Metropolis. At this time, there was a civilization on Mars.

First Line of Dialogue or Text
A reign of terror breaks out in a large city...
Genre
superhero
Characters
The Spider [Tom Hallaway] (introduction); The Cricket (villain, introduction, death); the Crickets (villains, introduction for all); Stevens
Synopsis
With the city in the grip of terror perpetrated by the Cricket, who, like the Spider, left a calling card at the scene of his crimes. With cunning, the Spider tracked him down and sent him to a watery grave.
Reprints
Keywords
Lebson's Department Store

The Spider was a supreme archer who crafted a special kind of arrow that burst into flame as it was fired. The arrow's tip left behind the Spider's mark: a scarab-like medallion, that served as a warning.

First Line of Dialogue or Text
... and have you been an escort for any of the glamor girls, lately?
Genre
biography
Characters
Jimmy Stewart; Anna Mae Wong

Wells was a former All-American halfback, now inventor. Despite his athletic background, Wells disliked physical combat and preferred to help people by using his wits. His solutions usually centered around the electromagnetic spectrum of energies, i.e. infrared, ultraviolet light, microwaves and electric eyes.

The Who's Who says that Terrance McAully was a house name Powell used while at Quality Comics.

Cross was an intrepid young aviatrix who got her pilot's license, then flew the world to lend a hand.

First Line of Dialogue or Text
If a young man's girl has $50,000,000 should he let that prevent him from marrying her?
Genre
humor
Characters
Little Butch; Nibbsy; Prince Alexis; Marjorie Daisy Whimple de Bass; Anna Smythe

[Origin of the Red Torpedo] (Table of Contents: 15)

Genre
superhero
Characters
The Red Torpedo [Captain Jim Lockhart] (introduction, origin); Meg (Jim's fiancee); Captain Wells (introduction); The the Nazis (villains)
Synopsis
When U.S. Navy man Jim Lockhart invented a human-guided, one-man submarine, his superiors in the military reject it. Not to be deterred, he took his invention to the private sector and, with his fiancee Meg, built it on their own. Then, donning his distinctive uniform, he saves an American ship from European aggressors.
Reprints

The Who's Who suggests, as do Mike Kooiman and Jim Amash in the Quality Companion, that Kiefer not only created this feature, but did the art for it through the strip's entire run. Kiefer is also usually considered to have written it.

Drew Allen is Kiefer's pen-name used on the strip.

That Battle of the World's Greatest Hurlers (Table of Contents: 17)

Richard Grey Jr. eventually assumed the identity of Senator Thomas Wright. Oddity: in this story only, his costume is colored red.