This is the last issue to carry the Comics Code Authority stamp on the cover. This seal had appeared on every issue since #202 in 1955. 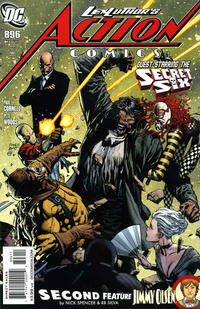 Genre
superhero
Characters
Lex Luthor; Vandal Savage; Secret Six [Scandal Savage; Bane; Deadshot [Floyd Lawton]; Catman [Thomas Blake]; Ragdoll [Peter Merkel]; The Last Victim [Jeannette; Silver Banshee]; Black Alice [Lori Zechlin]]; Robot Lois Lane [RoboLois]; Monique; Mister Mind; Joker (cameo)
Synopsis
Vandal Savage has confronted Luthor in his boardroom after sabotaging the building, but Luthor has worked out a deal with the Secret Six, summoning them to rescue him. Monique, one of Luthor's employees, reactivates RoboLois, reveals that she is being controlled by Mr. Mind, and asks her what happened when they met earlier. But RoboLois has her own agenda, separate from the person controlling Mr. Mind and from Luthor. She and the Six fight with Savage over a detonator, which results in RoboLois being cleaved in half, Savage's daughter Scandal injured, and the detonator triggered.
Reprints

Story continued from the previous issue and immediately continues in Secret Six (DC, 2008 series) #29 and after that in the next issue.

Genre
superhero
Characters
Jimmy Olsen; Lois Lane; Sebastien Mallory; Chloe Sullivan; Maggie Mxyzptlk (introduction)
Synopsis
Lois has volunteered Jimmy to be part of a charity date auction. Also participating is Chloe. Mallory wins a date with her, while nobody wants to bid for Jimmy. That is, until Maggie shows up with a $1,000,000 bid. They enjoy some time together, until Maggie suddenly shows magical powers, and reveals her last name is Mxyzptlk. Jimmy freaks out and tries to hide, but suddenly finds himself marrying her.
Reprints

Story continued from the previous issue, and continues in Jimmy Olsen (DC, 2011 series) #1.