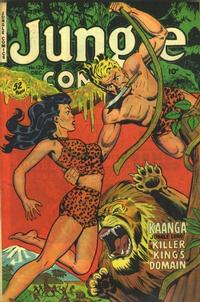 Genre
jungle
Characters
Kaänga; Zulu; Ann Mason; Azandes (African tribe); Bulando; M'fonga; Songa; Tugaro; El Haska
Synopsis
Kaänga learns that the Azandes have been forbidden to trade with the trader Songa by their witch doctor, M'fonga. Kaänga visits the tribe and tells the chief and the warriors that he thinks they should trade with Songa. At the trader's camp, the warriors are betrayed by their chief and Songa takes them all captives, including Ann, to be sold as slaves. Kaänga pursues them to the slave auction and frees the slaves and captures Songa. The chief is killed by Zulu as he attempts to escape.
Keywords
bolas; bondage; leopards; mandrills; pythons; saddle zebras; slave auctions; slavers; soporific drugs; whips; witch doctors

first line: "Only dimly did Zulu remember that fateful day when Kaänga, lord of the jungle, had found him on a funeral barge..."

First Line of Dialogue or Text
What is the unfathomable spell that the jungle weaves around the hearts and minds of men...
Genre
animal; jungle
Characters
Simba
Synopsis
Competing parties seek a legendary salt mine: white ivory hunters who will trade the salt to natives for their ivory and natives who will trade the salt for needed supplies. Simba, fighting cantankerous leopards, leads each party to the mine. The natives kill the white men, and Simba defeats the leopards.
Keywords
leopards; rhinoceroses; stereotyping of African natives

Simba turns white after a fall into a stream. While the change is noted in the text, there is no explanation for it.

Bottom one-quarter of the final page is a Jungle Comics subscription advertisement.

Getting Acquainted (Table of Contents: 5)

First Line of Dialogue or Text
What the gods have or ordained, let no man defy... [sic]
Genre
jungle
Characters
Tabu; Naya; Bulandas (African tribe); Songais (African tribe); Ovambu; Myra; Shelton; Yona
Synopsis
A thief steals the idol of Ovambu from the Bulandas and hides it in the temple of the Songais. A pair of treasure hunters come and loot the Songai temple, taking the idol. They attempt to trade the idol to the Bulandas, not knowing the provenance of the statue. The Bulandas kill them.
Keywords
crocodiles; diamonds; gas bombs; gas masks; idol of Ovambu; machine guns; storms

First Line of Dialogue or Text
A curse, ancient as the sands of Egypt...
Genre
jungle
Characters
Camilla; Fang; Jane Wiggin; Hetlai; Kolonas (African tribe); Al Storm; Ahmed; B'timi
Synopsis
Treasure hunters kidnap chief Hetlai's daughter in order to coerce him into helping them loot an ancient Egyptian tomb. Camilla frees the daughter and captures the treasure hunters. She prevents Hetlai from killing them so they can be turned over to the district commissioner.
Keywords
ancient Egypt; bondage; disguises; lions; mummies; Ritual of Ra; saddle zebras; sarcophogi; Treasure of Tut-akan