Credits from where the reprint is taken, from House of Mystery (DC, 1951 series) #229 (February-March 1975). This cover is made by zooming out slightly from the original and removing the banner at the bottom of the original. This reprint preserves the original composition made up of a partial reprint of yet an earlier cover, from DC 100-Page Super Spectacular (DC, 1971 series) #4 (1971). Creature reprint spotted by Frank Battaglia (submitted via the error list, December 2006). Color credit provided by Anthony Tollin. 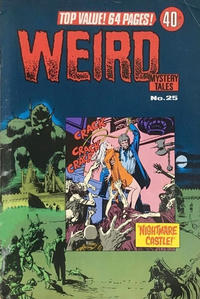 Feast for Slaughter (Table of Contents: 2)

This is Bill Finger's last story.

Panic in the Dark (Table of Contents: 5)

Job Number
B-1763
Genre
horror-suspense
Characters
Mrs. Tenborg; Ben Tenborg
Synopsis
"When a burglar breaks in, the squirrels that Ben has been feeding come to his rescue."
Reprints