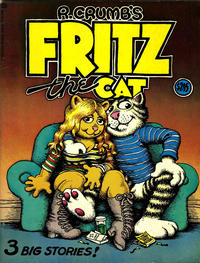 The inside front cover, inside back cover, and four interior pages are blank.

Title page with illustration. "Ballantine" is hand-lettered, because a corner of zip-a-tone in the "t" is folded over.

Illustrated title sequences for the three stories. Same illustrations as the back cover, except in black and white.

Fritz Bugs Out (Table of Contents: 6)

Created October 1964 - February 1965 before it's appearance in Cavalier.

Special Agent for the C.I.A. (Table of Contents: 7)

Titled "Secret Agent of the C.I.A" on the contents page and back cover. Previously unpublished. Created March-May 1965.

Fritz the No-Good (Table of Contents: 8)

Genre
anthropomorphic-funny animals
Characters
Fritz the Cat; Fritz's wife; Heinz; Winston; Fuzzy the Bun; Spick; Ira; Harriet
Synopsis
Fritz roams the streets after being thrown out by his wife. He hooks up with an old girlfriend, then later becomes involved with a small group of Marxist revolutionaries. An abortive attempt to blow up a bridge ends up with Fritz and his friend in jail.
Reprints

Back cover. Illustrated title panels for the interior stories. Also used in black and white in the interior as a table of contents page. These illustrations would be used as covers for the later three individual printings of the stories.