1st printing: ?; Second printing: November 1968. It was also published in hardcover which is listed separately.

Viking Press did not want to publish further editions due to the subject matter. The next two printings were by Ballantine. An expanded edition was published in 1988 by Simon & Schuster.

Certain panels in this edition were slightly altered by the publisher, to Crumb's displeasure. Three of the stories were edited for content- "Life Among the Constipated," "Abstract Expressionist Ultra Super Modernistic Comics" and "Hey Boparee Bop." The first story was edited for racial language, the second story has a single censored panel while the latter has missing panels. Details in the respective story notes. 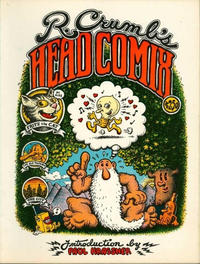 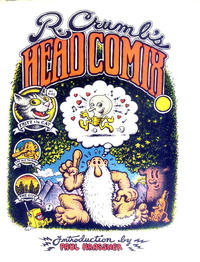 Introduce Yourselves (Table of Contents: 2)

Logo for this section is drawn by Crumb

A different title page logo than the previous one above

Definetly a Case of Derangement! (Table of Contents: 4)

Synopsis
A wordless story where the thought balloons contain for the most part only question marks.
Reprints

Life Among the Constipated (Table of Contents: 6)

The publisher removed the words "niggers" and "Schwartz" from this story.

First Line of Dialogue or Text
Better known as 'baldy' he goes forth with his mind to FIND GOD!
Genre
humor
Characters
Schuman the Human
Reprints

A panel on the third page that shows a vagina is censored. A series of several bandage-like strips were drawn over the image by another artist.

The Man from Affiganistan (Table of Contents: 11)

Genre
humor
Characters
Mr. Natural; Flakey Foont
Synopsis
The country name in the title is shown as spelled by the artist.
Reprints

Mr. Natural Gets the Bum's Rush (Table of Contents: 14)

Originally titled "Head Comix." Besides being reformatted to stretch out over two pages, the story has four panels missing from its original version. The panels in question featured the "Av 'n' Gar" characters accosting a woman in a sexually explicit manner. All future reprints published the story intact.

Genre
humor; satire-parody
Characters
Whiteman; Madame Too Too
Synopsis
Whiteman struggles to keep his rigid self from falling into a nervous breakdown.
Reprints

Western Man, Last of the Big-Time He Men! (Table of Contents: 22)

The Old Pooperoo Pauses to Ponder (Table of Contents: 24)

Titled "I Wanna Go Home" in the table of contents.

continued from the previous sequence

Schuman the Human - a Poignant Psychological Drama (Table of Contents: 27)

Just Look What They're Saying! (Table of Contents: 29)