The Mutant (Table of Contents) 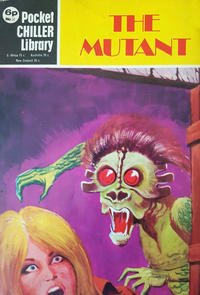 The Mutant (Table of Contents: 1)

First published work in the comics field by the artist Enrique Nieto, later of Charlton Comics. A superb example of his particular precise, moody and atmospheric black and white draughtsmanship, seen in several of the "Pocket Chiller Library" titles, circa mid 'nineteen seventies.