This is the first issue since 1955 to NOT carry the Comics Code Authority stamp on the cover. This seal had appeared on every issue since #202.
This issue has variants:

This cover is similar to other covers from this month; it has no title logo, and consists of the feature character against a white background. 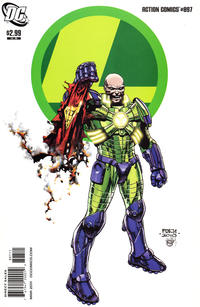 Genre
superhero
Characters
Lex Luthor; Robot Lois Lane [RoboLois]; Mr. Spalding; Joker; Agent Orange [Larfleeze] (cameo)
Synopsis
Spalding discovers information that the original articles on the black spheres were planted, but can't yet tell Luthor that as Luthor is about to interview Joker. At the interview they banter back and forth a while, but Joker reveals he has one of the spheres, and that it's a keyhole. Spalding activates it, enlarging it. Luthor leaves the room, and RoboLois pushes Spalding into the sphere, and it shrinks back to small size. When Luthor asks what happened, RoboLois blames Joker.
Reprints

Story continued from the previous issue and from Secret Six (DC, 2008 series) #29, and continues in the next issue.

On Valentine's Day (2011-02-14), on DC's The Source blog, Paul Cornell was asked how Lex Luthor might be spending the day. His answer was a scene that would be set in between this story and the next issue, and it foreshadowed some of the events of next issue. He said that RoboLois asked Lex to see "Wicked" on Broadway, and cried during it. Lois told him she enjoyed dramas about betrayal, and that she learned from them. See here for the full answer: http://dcu.blog.dccomics.com/2011/02/14/how-does-the-worlds-smartest-man-s…

Announcement of the return of letters pages. Appears on pages 32 and 33 in this issue.