Wolves of the Desert Night (Table of Contents) 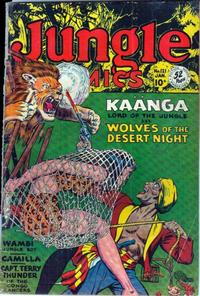 Wolves of the Desert Night (Table of Contents: 1)

first line: "In the ancient temple of the Lotumbu kraal there was a legend inscribed on the altar wall..."

First Line of Dialogue or Text
'A lost city where an ancient civilization once flourished, lies crumbing beneath the matted jungle at Kongola.'
Genre
jungle
Characters
Terry Thunder; Professor Morely; Dian; Ali Khaber; Cass Stinson; Loangas (African tribe); Kamba; Buck
Synopsis
Terry escorts an archaeologist and his assistant to the Kongola country where they hope to find a buried, ancient city. A pair of prospectors, illegally hydraulically mining in the area, unearth the city. When Terry's party arrives the prospectors take them prisoner, demanding the maps that will help them properly loot the city. Terry overcomes them and arrests them
Keywords
archaeology; elephants; gold; helicopters; hydraulic mining; Kongola (African region); steamboats

The bottom one-third of the final page is a subscription advertisement for Jungle Comics.

First Line of Dialogue or Text
Wake up, Wambi!
Genre
jungle
Characters
Wambi; Tawn; Tongo; Croft; Ogg
Synopsis
A snake charming witch doctor is hired by hunters to bring them game. He uses his flute to lure all the animals of the jungle to the hunters' steamboat where they are caged. Wambi follows and frees the animals, extracts a promise from the witch doctor to never do this again, and cages the hunters, sending their steamboat down the river.
Keywords
hypnosis; snake charming; steamboats; witch doctors

First Line of Dialogue or Text
The jungle wherein Tabu, the wizard, dwells, is a land of darkness and evil...
Genre
jungle
Characters
Tabu; Zana; Tonga; Golas (African tribe); Basuris (African tribe); B'maki; Orago
Synopsis
B'maki, a prince of the Basulis, intercepts the new bride of his brother, Orago, as she makes her way to the Basuli village. He plans to marry her himself and become chief. Tabu divines the location of the kidnapper and his victim and hypnotizes B'maki, causing him to fall in a crevasse where he will wait for the jungle authorities.
Keywords
bats; caves; crocodiles; saddle zebras

The Elephant (Table of Contents: 7)

First Line of Dialogue or Text
At the fork in the ancient jungle trail, Camilla posted her taboo...
Genre
jungle
Characters
Camilla; Benton; Kent; Fang (dog); Akari; the Scorpion; K'tia; N'kyla
Synopsis
Camilla infiltrates the camp of the safari raider, the Scorpion, disguised as one of his lieutenants. She then opens the camp's gate to a safari that had been robbed by the Scorpion and they defeat the Scorpion's men.
Keywords
disguises; hunting cheetahs; leopards; mannequins; rope bridges; saddle zebras