This comic is undated. Dating is an estimate from www.ausreprints.com. 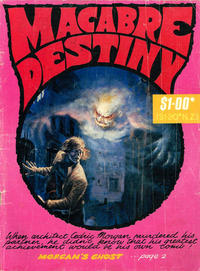 Genre
horror-suspense
Synopsis
When a new bridge is completed, one of the engineers who built it murders his partner in an effort to keep all the glory for himself.
Reprints

Paid in Full (Table of Contents: 2)

The Space Pirates! (Table of Contents: 3)

The Heart that Never Was (Table of Contents: 4)

"©—Editorial Vilmar—Barcelona—The Illustrated." Other printings of this story include: Escorpion (Vilmar, 1973 series) #58 (June 1982)

Scream No More, My Lady (Table of Contents: 5)

What a Picture It Would Make! (Table of Contents: 6)

Genre
fantasy-supernatural
Synopsis
A low-budget film studio considers making a picture about Wilhelm Brandt, a sorcerer who was cheated out of payment after freeing a town from a plague of wolves. But they didn't count on the actor they hire being the reincarnation of Brandt.
Reprints

The Weird Corpse (Table of Contents: 8)