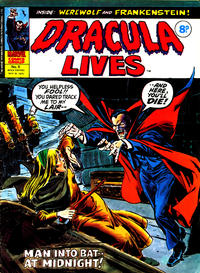 Hunt for a Vampire! (Table of Contents: 1)

Second half of story. Starts with a retitled, made up for the UK edition, splash page which shows a flying bat with swirls surrounding it.

Werewolf by Night! (Table of Contents: 3)

Second half of story with splash page from first half added at the beginning.

A Death of Death! (Table of Contents: 5)

Retitled second half of story with added, re-done? splash page for title and credits.