Cover has "This is a King Feature" emblem. 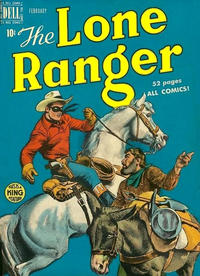 The Chisholm Trail... (Table of Contents: 1)

First Line of Dialogue or Text
After the civil war Texas ranchmen returned to find their range overstocked.
Genre
non-fiction; western-frontier
Synopsis
Facts about cattle drives on the Chisholm Trail.

Inside front cover in black and white with illustrations and text plus the publisher & indicia information.

The Lone Ranger and the Strange Birthday Present (Table of Contents: 2)

Job Number
L.R. #20-502
First Line of Dialogue or Text
Hutch, are you sure old Danvers will come along this trail today?
Genre
western-frontier
Characters
Lone Ranger; Tonto; Silver (horse); Scout (horse)
Synopsis
The Lone Ranger is accused of killing a messenger who had a letter that was to be delivered to Bob Lawton on his 18th birthday.
Reprints

Three tiers of panels per page.

The Yarns of Old Gabe (Table of Contents: 3)

First Line of Dialogue or Text
Jim Bridger perhaps the greatest of the old scouts, had explored more of the West than any other living man.
Genre
non-fiction; western-frontier
Characters
Jim Bridger
Synopsis
The fables told by frontier scout Jim Bridger in the early part of the 19th century. Bridger was one of the first white men to see Yellowstone Park, but when he described the sights he'd seen, no one believed him. Miffed, he concocted far-fetched tales based on the wonders of the old west.

[The Cougar Killer] (Table of Contents: 4)

Special Offer to Readers of this Comic! (Table of Contents: 6) (Expand) /

Back cover; 13th in a series of portraits of Indian warriors and chiefs.