This issue went on sale on time. "Printed by Quad/Graphics, Montreal, QC, Canada. 02/11/11."
This issue has variants:

It's the Luthor vs. Larfleeze Rematch! (Table of Contents) 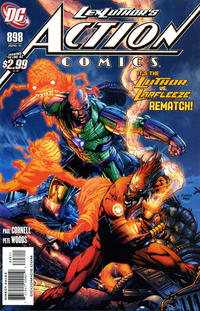 Genre
superhero
Characters
Lex Luthor; Michael Finch (death); Robot Lois Lane [RoboLois]; Ms. Jessup [Ms. Jessop]; Agent Orange [Larfleeze]; Glomulus; Brainiac (cameo)
Synopsis
The space-located black spheres have all moved together. Luthor is going up there to gain their power, when Larfleeze interrupts. He reveals that Glomulus has the last Earth-located sphere, and he wants to know how to use their power, threatening Luthor and his people. Luthor shows he doesn't care about that by shooting Finch dead. They fight, until Luthor is able to push Larfleeze into the sphere he got from Joker. After gaining the sphere Glomulus had, Luthor and RoboLois launch into space. Larfleeze comes out of another sphere, saying what’s in there he doesn't want (for the first time).
Reprints

Beware Their Power! War of the Green Lanterns a Blockbuster Event (Table of Contents: 2) (Expand) /