Indicia says "The Return of Cthulhu"; cover says "The Call of Cthulhu"; title page says "The Coming of Cthulhu".
Esteban Maroto originally created the stories for Editorial Bruguera in 1982. Bruguera went bankrupt before they were published. Parts were published in Capitán Trueno by Ediciones B. Roy Thomas created a new script for the art in this publication. 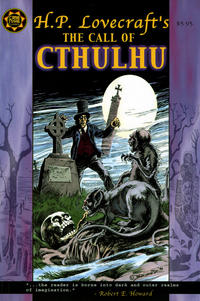 This is the inside of the front cover.

H. P. Lovecraft's The Coming of Cthulhu: 1. The Nameless City (Table of Contents: 2)

H. P. Lovecraft's The Coming of Cthulhu: 2. The Festival (Table of Contents: 3)

Adaptation of the short story The Festival originally published in Weird Tales, January 1925.

H. P. Lovecraft's The Coming of Cthulhu: 3. The Call of Cthulhu (Table of Contents: 4)

Adaptation of the short story The Call of Cthulhu orginaally published in Weird Tales, February 1928.