This Four Color issue was originally intended to feature LASSIE, but a subsequent decision was made to give the canine heroine her own series beginning with #1 instead.

No ads in this issue. All 52 pages are comics or comics-related text material.

Donald Duck and The Pixilated Parrot (Table of Contents) 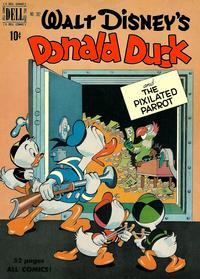 Pantomime. Black and white on inside front cover.

Donald Duck and "The Pixilated Parrot" (Table of Contents: 2)

First Line of Dialogue or Text
County Fair Cash Prizes!
Genre
anthropomorphic-funny animals; humor
Characters
Donald Duck; Huey; Dewey; Louie; Hamlet (pig); farmer; chicken; baby chicks; contest judge
Synopsis
Huey, Dewey, and Louie go to a farm to get an animal to show at the county fair. They're given a piglet named Hamlet, but the pig gets away and leads them (and Donald) on a cross-country chase.
Reprints
Keywords
county fair; pigs; prize; wild chase

This backup story is four pages longer than the lead adventure story.

First Line of Dialogue or Text
Lemonade all you can drink 1¢
Genre
anthropomorphic-funny animals; humor
Characters
Donald Duck; Huey; Dewey; Louie
Synopsis
After Donald takes unfair advantage of the nephews' "all you can drink" offer at their lemonade stand; the nephews tie knots in the straws so he won't be able to repeat the offense.
Keywords
lemonade; trickery