All contents copyright © 2011 Disney Enterprises, Inc.
This issue has variants:

Mystery of the Loch (Table of Contents) 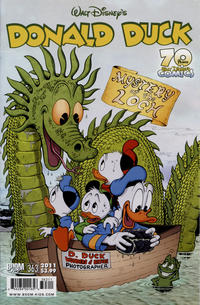 The Saga of Captain Duckburg (Table of Contents: 2)

This story is a loving tribute to popular and influential Donald Duck comic book writer/artist Carl Barks (the creator of Uncle Scrooge McDuck), and is chock full of Barks references of all kinds.

Somewhere Beyond Nowhere (Table of Contents: 3)

Mystery of the Loch (Table of Contents: 4)

Classics Are Back at Boom! (Table of Contents: 5) (Expand) /