The Flash Gets "Grounded"! (Table of Contents)

The original cover (as solicited) is signed by the artist and colorist; but the signatures are under the text on the final cover. 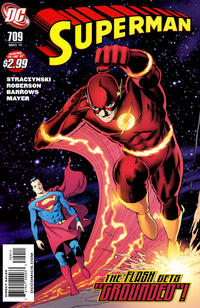 Genre
superhero
Characters
Superman; Super-Chief [Saganowahna]; Flash [Barry Allen]; Lex Luthor (flashback); Superboy [Conner Kent] (on TV); Kid Flash [Bart Allen] (on TV); Iron Munroe (on comic book); Flash [Wally West] (cameo); Flash [Jay Garrick] (cameo); Flash [John Fox] (cameo); XS (cameo)
Synopsis
Superman continues walking across the country, visiting Boulder, Colorado. After helping Super-Chief capture some criminals, he arrives in Boulder, just to find himself, the townspeople, and the town itself decked out in Kryptonian garb. He also hears a voice spouting Kryptonian facts at hyperspeed, and tracks it down to the Flash. After just managing to catch up to him, he figures out the problem is a Kryptonian headband that Flash is wearing, and removes it. Restored to normal, Flash explains what happened, and over dessert they discuss morality, and also both heroes' legacies.
Reprints

Story continued from the previous issue, and continues in the next issue. This is not a co-writer situation, Roberson is working from Straczynski's plots; they gave him a rough outline that JMS had turned in for the remaining issues of the Grounded arc, which amounted to a sentence or two for each of the issues, spelling out in general terms where the issue would take place geographically, specific guest stars, etc.

When a waitress trips and spills food in front of Flash, he responds by saying "Happens to me all the time." And indeed, it happened in his first appearance in Showcase (DC, 1956 series) #4, when he first figured out he had speed powers by saving all the spilled food.

Superman's reference to young Lex Luthor "stealing forty cakes from the school's bake sale" is actually an inside reference to the old book "The Super Dictionary", a 1978 children’s book from Warner Educational Services that used DC Comics superheroes to define some 4,000 words. One of them was "forty", and to illustrate that, they had a picture of an adult Lex Luthor stealing forty cakes with this text: "When no one was looking, Lex Luthor took forty cakes. He took 40 cakes. That's as many as four tens. And that's terrible."

In the Spotlight / promo (ad from the publisher) / 0.5 page (report information)